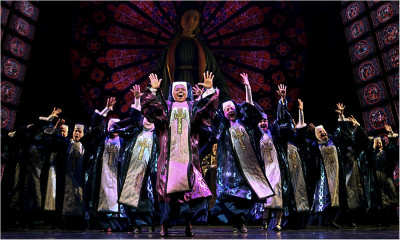 It always surprises me how much people LOVE themselves some singin’ nuns. When I saw Sister Act, the people sitting behind me in the theatre RAVED. From what I could overhear, they saw a few Broadway shows a year, and this was one of their recent faves. From the overall audience response, it seemed many in the theatre agreed. So while I can’t count myself as the biggest Sister Act fan, I have to admit that it is a big brassy musical that will appeal to many who come to New York looking for a fun Broadway show.

So why my lack of enthusiasm? For the most part, there is nothing wrong with the show (well, almost nothing). It just isn’t all that special or memorable. The book, telling a story familiar to those who have seen the 1992 movie starring Whoopi Goldberg (a producer of this musical), is serviceable. The story, although relocated from San Francisco to 1970s Philadelphia, is pretty much the same as what I remember from the movie. Deloris Van Cartier, a gangster’s struggling singer-girlfriend, witnesses a murder and goes on the run – to a convent. Initially reluctant, she brings new life to the horribly comatose church choir, and soon the group is spreading their soulful love all over town. Douglas Carter Beane has added some new material to the London production, including a lot of typical jokes, like those about gay men ("two bachelors who deal in antiques") that are generally only funny to those who have never met one.

The music, a sort of Philly-flavored mix of soul and R&B, is mostly fun. And the performers are all excellent. Victoria Clark and Patina Miller (Mother Superior and Deloris, respectively) both are extremely deserving of their Tony nominations. And every secondary character gets their own moment, many of which are among the show’s highlights. There’s “I Could Be That Guy,” in which Eddie Souther, the cop who helps hide Deloris, dreams about an alternative life; the song makes intriguing use of homeless people. One of my favorites is “The Life I Never Led,” one of the more “musical theatrey” moments sung by Mary Robert (Marla Mindelle) in Act 2. And then of course, Deloris gets to lead the nuns in some rousing musical group numbers. There is a lot of clapping and LOTS of sequins. And I’ll say it again: people love singing nuns.

One problem is Sister Act’s oversimplified racial characterizations. The black characters, even the bad guys, are soulful yet secular, standing for (and singing with) excitement and enthusiasm. The white characters are uptight and religious; they’re well behaved but they need to get out of their shell and learn how to live. It’s actually kind of surprising how retro it all is. I mean, I know the show is set in the 1970s, but must we really be hit over the head with such overly familiar stereotypes?

But while that aspect may not bother many people too much, those who go to new musicals for something – well, new – may not find much here. There aren’t too many surprises in the story, even if you haven’t seen the movie. Nor are there surprises in how the story is told, especially if you’ve seen your fair share of Broadway musicals. There’s lots of glitz and glamour – the final sequence is somewhat jaw-dropping in this respect – but beneath all of that, aside from the performers, there isn’t much else there. But again, I’m sure for those who don’t get to see many Broadway shows, Sister Act will be a perfectly enjoyable evening.