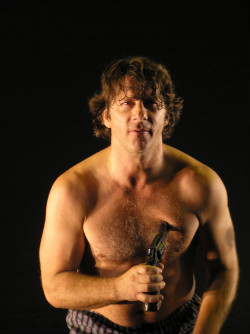 BOTTOM LINE: A well-crafted script combined with an energetic performance creates a compelling, sometimes humorous exploration of the mindset of Roman Polanski during pivotal moments in his life.

When one hears the name Roman Polanski, the first thought might not be of his illustrious film career, but rather of his arrest for the rape of a 13-year old girl. This grim incident is the focus of Polanski, Polanski, a one man show that consists of three scenes from the filmmaker's life: One shows in the incident itself, one shows him fleeing America, and one shows him under house arrest in Switzerland.

The play opens during that pivotal day in 1977, when Polanski was doing a photo shoot with then 13-year old Samantha Geimer, in Jack Nicholson's mansion in the Hollywood hills. Polanski is shown to be an upbeat manic, fixated on the physical beauty of his pubescent model. He again and again offers praise and awe at the flesh before him proclaiming it "an old poem written in new flesh." Playwright Saviana Stanescu gives some hint at the sadness lurking beneath Roman's otherwise jubilant exterior, giving reference to his parents who were killed in a Nazi concentration camp in World War II, as well as Sharon Tate, his wife who was murdered by Manson followers. While these aspects could have been played up as possible reasons for his self destructive behavior, instead they are just lightly touched upon.

As Polanski, Grant Neale leaps across the stage in a frenzy as a man who is zany and childlike as well as lecherous. His total disregard for societal mores, morals, as well as common sense, is at first painted as humorous. He pours champagne for his young model, proclaiming it acceptable as all children should grow up with a "knife and champagne" in their hands, in order to teach them of the dangers
in the world.

Later, when Polanski is shown raping an unconcious Samantha his zaniness and unpredictability takes a darker turn. Polanski tries to hold himself back, expressing surprise when Samantha follows his request to remove her underwear, referring to his resulting erection as "the knife in the water." In this interpretation of the incident, Samantha is shown to be the innocent party, victimized by coercion as well as the quaaludes and alcohol fed to her by  Polanski.

In the following scene we see a frantic Polanski escaping the city he loves in a taxi cab, exclaiming "Los Angeles, Je t'aime!" from the window as he says goodbye to his Hollywood life. He tells the cabbie to keep driving, regardless of whatever he might say later on.

In the third scene we see a despondent Polanski under house arrest in Switzerland, fiddling with a loaded gun as he stares into the eye of a camcorder. He stares fixedly to a Larry King interview with Samantha Geimer playing on his television. While he admits his actions were wrong he attempts to console himself by pointing out that Geimer says she now has a happy life and has gotten over the incident. After playing rounds of Russian Roulette with himself, he reveals to the audience that the gun is in fact not real, stating that as he is under house arrest he is not even allowed to take his own life, laughing at his situation.

Polanski is shown both to be a charismatic manic as well as too self absorbed to fully comprehend the full effect of his actions, leaving the audience to be conflicted in the stimultaneous sympathy and disgust. Stanescu boldly tackles the sometimes stomach-turning material, finding both humor and sadness in Polanski's story. Stanescu's well-crafted script along with Grant Neale's animated performance
create a compelling and insightful work, showing how a man capable of creating such cinematic beauty could also be capable of committing something so destructive and horrific.