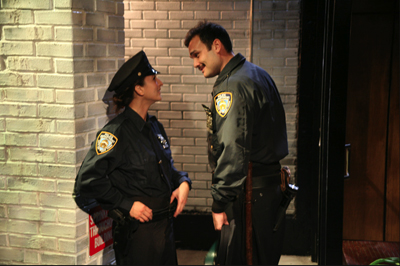 BOTTOM LINE: A sometimes tense, sometimes funny look at everyday moral dilemmas that questions whether there is such a thing as absolute truth.

Since being dishonorably discharged from the Navy for smoking weed, Jeff (Michael Black) has been something of a ne’er-do-well, down on his luck and at loose ends. While he says that he wants to do something important with his life, what to do has remained elusive. For the time being, he’s working as a security guard at a fancy Manhattan high-rise, doing his best to repay his debts and figure out his next move.

His boss, William (Nasay Ano), is Captain of the building's security team. Arrogant and full of condescending advice about bucking up and being an upstanding citizen, William typically lords over Jeff like a patronizing and haughty elder statesman. Tonight, though, is different, and William’s veneer has begun to fray; it is obvious that something is troubling him. As Jeff probes, William confesses that his kid brother has been arrested. The charge? Barging into a hospital with two of his friends to steal prescription drugs. And that’s not the worst part. Apparently, a nurse who attempted to stop the theft — a single mom of three young children — ended up dead and a murder charge now hovers over the threesome. Although William concedes that his brother has not always lived on the straight-and-narrow, he tells Jeff that he can’t believe his brother would do such a heinous thing. Robbery, maybe. Killing someone, absolutely not.

William’s dilemma extends beyond concern for his sibling, however. He’s terrified because his brother has fingered him as an alibi, reportedly telling the cops that he and William were at the movies on the night of the crime. This puts William in a quandary. If he doesn’t back his brother up, a racist court system and an incompetent public defender might send his brother to jail for life — or even execute him. But can he lie?

Meanwhile, as William and Jeff grapple with the finer points of this thorny predicament, two cops, rooky Dawn (Olivia Rorick) and Bill (Joshua Sienkiewicz), a long-timer on the force now up for promotion, pay a visit to the building, something that happens each and every night. While Bill goes upstairs to see a friend, he leaves newbie Dawn to hang out in the lobby and cover for him if anything comes up. As she and Jeff chatter and flirt, it becomes clear that Jeff is not the guy to trust with your most cherished secrets. A blabbermouth extraordinaire, he attempts to dazzle Dawn by telling her what he knows about William’s brother. The audience is left to decide for itself whether this confession makes Jeff a hero or villain.

In addition to this moral quagmire, Lobby Hero also hits a number of other salient themes, from the entrenched sexism of the NYPD, to the way the so-called Blue Wall of Silence hides the transgressions of officers on the force. Power dynamics between people of lesser and higher rank, and the idea that lying may be the most moral thing one can do, are addressed and intentionally left unresolved.

Lonergan’s writing is sharp, and the first act is particularly witty. Nonetheless, the 10 year-old work — it opened at Playwrights Horizons in March 2001 after winning the Outer Critics Circle award in 2000 for Best Play — is a bit longwinded. Although the accents are sometimes uneven, the four-person ensemble still hits many high notes, and the production shines with a perfect set designed by Matt Brogan. As an exploration of real-life conundrums, Lobby Hero looks at the intersection of race, class, and gender, and asks us how far we’ll go to protect those we love.

(Lobby Hero plays at T. Schreiber Studio's Gloria Maddox Theatre, 151 West 26th Street, 7th Floor, through December 3, 2011. Performances are Thursdays and Fridays at 8PM; Saturdays at 2PM and 8PM; and Sundays at 3PM until November 20th; Wednesday through Friday at 8PM and Saturday at 2PM November 30th through December 3rd. Tickets are $20 and can be purchased at tschreiber.org.)