Same-day general rush tickets are sold when the box office opens: $30 each, cash only, 2 per person, and the line forms early!

How To Succeed in Business Without Really Trying

Music and lyrics by Frank Loesser; Book by Abe Burrows, Jack Weinstock, and Willie Gilbert, based on the book by Shepherd Mead
Directed and choreographed by Rob Ashford 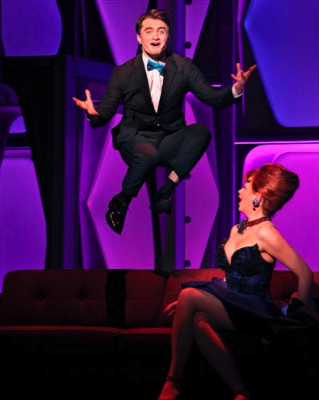 BOTTOM LINE: The “50th anniversary” revival of How To Succeed is super fun, and Daniel Radcliffe is super charming. Even those who aren’t fans of Harry Potter will likely walk out grinning from ear to ear.

How To Succeed… is a somewhat satirical look at mid-century “good ol boy” corporate culture; the show is one of only eight musicals to ever win the Pulitzer Prize for Drama. Radcliffe plays J. Pierrepont Finch, a window washer who, with the help of a little book (the title of which gives the musical its name), attempts to climb the corporate ladder in record time. As he makes friends and influences people, Finch draws the attention of everyone at the firm of World Wide Wickets, including his arch-rival Bud Frump (the boss’s nephew) and sweet-as-pie Rosemary Pilkington, his eventual love interest. With the help of a fantastic script (including voice-over narration by Anderson Cooper), a terrific score by Frank Loesser (Guys and Dolls), and Rob Ashford’s snappy direction and athletic choreography (just wait till you see the dance in the mailroom!), this big, bold, and brassy production speeds you along to the deliciously inevitable conclusion.

So how good IS Daniel Radcliffe, given that he is a huge celebrity who was surprisingly NOT nominated for a Tony Award? In short (and he is short), he’s great, which is why so many people were surprised that he was snubbed. Radcliffe doesn’t have the strongest singing voice, but I’ve never found a beautiful voice to be an essential element for musical theatre actors. I’m more interested in character and stage presence, and Radcliffe has this in spades. Part of this is helped by the audience’s enormous excitement at actually seeing “Harry Potter” live; the scream for his first entrance is astonishingly loud, a tidal wave of adolescent fandom. But Radliffe keeps his energy WAY up throughout the entire, clearly exhausting, show. And he is incredibly charming: every so often he turns to look at the audience, and gives a sly yet innocent grin in response to yet another fortuitous turn of events. You’d think the gimmick would get old, but with Radcliffe’s boyishly fun presence, this repetition only makes it that much more enjoyable each time he does it.

But Radcliffe is far from the only draw here. John Larroquette (from Night Court) is also wonderfully fun as President J.B. Biggley; the height difference between Larroquette and Radcliffe alone is enough for a laugh. And when the two join to sing “Grand Old Ivy,” which eventually becomes a rousing chorus number with football players who appear out of nowhere, their performance quite literally stops the show.

Christopher J. Hanke plays Frump, and is hilarious as the obnoxious thorn in Finch’s side who makes no attempts to hide his reliance on nepotism. Tammy Blanchard is also fantastic as Hedy La Rue, the sexy new “secretary” whose very untouchability (she’s the boss’s girlfriend) makes her all the more tempting to the men in the office. This could easily become a typical “dumb blonde” role, but Blanchard plays Hedy as all-too aware of her seductive powers, and therefore all the more enjoyable to watch. And I also must single out fellow Rochesterian Michael Park, who plays Mr. Bratt, the personnel manager. Bratt could easily be a forgettable role, but Park’s manly presence and light-footed dancing helps ground the production, giving it that bit of realism so necessary for effective satire.

And this show is satire, although I’m not convinced the satire is always effective. While the show cleverly pokes fun at how certain kinds of “skills” are valued (or not) in corporate America, its gender politics are a bit muddier. After all, this is a show in which Rosemary sings about how she will just be “happy to keep his dinner warm while he goes onward and upward.” It is easy enough to say “but it’s satire!” and shrug it all off as knowing commentary on the male chauvinism of the early 1960s. But I’m not so sure it is that simple. While Rose Hemingway gives a beautiful and strong performance as Rosemary, and does what she can to play her as a free-thinking, independent, dignified woman of her time, the character ultimately remains by her man’s side, no matter what, and there is never a question that she won’t. So without getting too analytical, it is easy to see how audiences might easily leave thinking “that was a lot of fun, but SO sexist!”

But then again, it is a show written in 1961, and rather than attempting to re-write some of the troubling parts of the show (as Des McAnuff did for the 1995 revival), Ashford has wisely chosen to stick to the original script. If there is one complaint about Ashford’s production, it’s that there might be too much dancing. Act Two begins with the secretaries’ “Cinderella Darling,” which Ashford turns into a tap routine, almost as if he’s afraid that without a big dance number, the audience will fall asleep as soon as intermission is over. But since the choreography is often surprisingly inventive, this is a relatively minor criticism. This is the first time I have seen this musical, so while I can’t compare this version to the 1995 one (let alone the original), I can say that 50 years later, How To Succeed in Business Without Really Trying is still relevant, engaging, and a whole lot of fun.

(How To Succeed in Business Without Really Trying plays at the Al Hirschfeld Theatre, 302 W 45th Street. Performances are Tuesdays at 7 PM, Wednesdays at 2 PM and 8 PM, Thursdays at 7 PM, Fridays at 8 PM, Saturdays at 2 PM and 8 PM, and Sundays at 3 PM. Tickets are $52 - $132. Same-day general rush tickets are sold when the box office opens: $30 each, cash only, 2 per person, seats are far side orchestra and boxes (and the line starts forming early!) To purchase tickets, visit telecharge.com or call 212.239.6200. For more information visit howtosucceedbroadway.com.)