Off Off Broadway, Play
Runs through 12.18.11
Walkerspace, 46 Walker Street 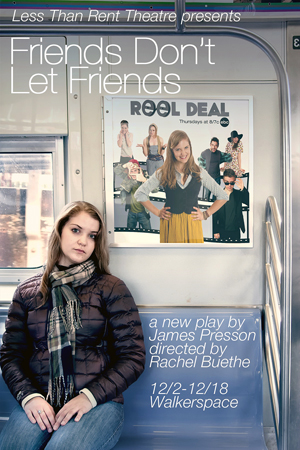 BOTTOM LINE: A complex look at one of life’s most vexing questions: Is this all there is?

There’s a point in most of our lives where we ask ourselves what we can do to make a dent in the universe — either on the macro or micro level. For some of us, this means reproducing, creating — or maybe just raising — a new generation to carry on our name and legacy.  For others, the desire translates into working to produce something of lasting impact or beauty.

Hannah (Becca Ballenger) is presently confronting this dilemma and Friends Don’t Let Friends is largely her exploration of what has become a well-trod theme. But despite the familiarity of topic, the multi-layered story takes an unusual approach, causing the viewer to question the line dividing reality and either paranoia or fantasy. To be concrete, the story zooms in on Hannah’s workplace, a highly successful weekly TV sit-com where she has had a starring role for several years. Despite the steady work — a dream for most actors — the non-stop laugh track and banal script have started to wear on her. Worse, her character has become increasingly bitchy and she fears that the scriptwriters will marginalize her because she is no longer particularly likeable. “They could throw me out like spoiled milk,” she whines.  Still, a question nags: Is Hannah being made expendable because her personal distress has started to show on camera, or is she distressed because of what is happening on stage? On top of this, her famous actor dad is seriously ill, pushing concerns about mortality front and center.

The sit-com (think Friends, How I Met Your Mother, and Desperate Housewives, then stir in a large dollop of over-the-top melodrama and a dash of zaniness, and you’ll get a close approximation of the program Hannah stars in) is typical of early evening TV fare. The actors — an eight-character ensemble — play a documentary film crew and their adventures involve numerous scrapes, both romantic and otherwise.

Indeed, the cast members spend many hours a week together, working in close quarters, and their on-stage frolicking seems to mimic what goes on in the off hours. But are they really friends? Or do they just play friends on TV? As Hannah’s worries and confusion escalate, her performance suffers and it’s hard to discern if it’s life imitating art or the reverse.

For other cast members the show is a paycheck, and a good one at that. Brad (Will Turner) expresses it clearly: “We’re not Doctors Without Borders. Were not curing cancer. We’re actors. I just want to be funny and entertaining, but it’s basically meaningless. We record 22 minutes of footage a week.” The others concur; they’re looking for little more than levity and recognition for their role as comics. This leaves Hannah at loose ends and her increasing emotional fragility and angst slowly become burdensome to her colleagues.

It’s a heavy theme and its juxtaposition against a backdrop of inane television is clever and gives Friends Don’t Let Friends a memorable and moving edge. While I would have liked to see more off-sit-com scenes to embellish each actor’s back-story, the play’s message about finding meaning in one’s work is well thought out and well delivered.

What’s more, having a silent, black-clad crew tromp around the set between scenes — sweeping, scrubbing, dusting and fawning over each actor to retouch make-up and hair — gives the audience a faux peak into the world of theater and theatrics. The difference between star and crew, and between job and vocation, is thus underscored. In the end, audience members are provoked to assess their own position on these weighty matters.

(Friends Don’t Let Friends plays at Walkerspace, 46 Walker Street, through December 18, 2011. Performances are Tuesdays through Fridays at 7:30PM; Saturdays at 2PM and 7:30PM; and Sundays at 2PM.  Tickets are $18 and can be purchased at lessthanrent.org.)