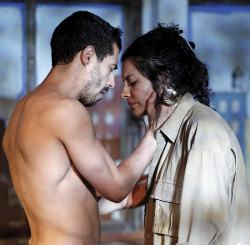 It is during failing sexual relationships that human beings often lay themselves most bare, exposing their shortcomings and vulnerabilities. This is why plots centered around failed romantic relationships often provide intense fodder for gifted actors. This is certainly the case for Liza Fernandez and Jose Joaquin Perez, who put their talents on full display by portraying former lovers excavating the dark, emotional terrain of their failed relationship.

Ana (Fernandez) and Michael (Perez) ended their relationship during the course of a heated argument, when Michael walked out vowing never to return. After six months of no communication between the two, Ana decides to sell the studio apartment in which they resided, of which she was apparently the sole owner. Supposedly as a way of offering an olive branch, she tells Michael, a near penniless painter, that she will pay him to repaint their apartment a bright shade of red in the hopes of selling it.

The play opens with Ana arriving home to discover that Michael has repainted their walls with bright images to depict the memories of their four-year long failed relationship (cleverly, plastic drop cloths serve in lieu of curtains, which Michael rips away as he shows Ana his surprise). Ana is at first angry beyond words, spitting out a torrent of fury, but as Michael explains the stories behind each of the images she becomes sentimental for the life together they have lost.

Michael tells her that staring at the stains on the walls, created during the years of their relationship, was like staring at “cancerous movies” and slowly he was forced to relive their relationship over again. As these memories turned through his head, he felt compelled to paint them onto the stained walls. Michael tells Ana that this is the first time he has been able to paint since their breakup, revealing that the pain of losing her has left him unable to access his talents.

Ana seems to be torn between the lingering flames of her sexual desire for Michael as well as her bitterness over the circumstances of their split. She walks the line between desire and anger expressing both at once.  During one cleverly staged point in the play, Ana climbs on top of a reclined Michael, kissing him passionately and pouring wine into his mouth, seemingly preparing for sex. Instead, she suddenly upends the bottle of red wine pouring it all over Michael, crushing his hope for a sexual reunion.

At first, Ana’s anger seems to be too much, with Michael appearing as the wronged party. But as they rehash the circumstances of their failed relationship we soon learn that it was Michael who in fact left. Ana has been haunted during the course of the six months by the fact that Michael ran straight from her to the bed of another woman, who appeared at Ana’s door that same night to tell her that Michael was now her man and would never come back to her. “She smelled so much like you, I thought that she was you,” Ana says sadly, revealing the pain she has been carrying. Michael then pushes Ana into revealing that her offer to have him paint the apartment was not simply a well-intentioned favor, but rather a means to revisit the relationship and excavate emotional terrain.

Actors Liza Fernandez and Jose Joaquin show immense talent in their performances, authentically capturing the whirlwind of emotions exposed as their characters plumb the depths of their bitterness and intense sexual desire. The direction, by Lou Moreno, guides the actors into displaying emotions that are nuanced enough to seem authentic and never over the top. Playwright Maggie Bofill turns what could be a simple story, into a compelling work filled with raw emotion which leaves the audience at the edge of their seats until the very end. The play is nicely accompanied by conga drumming from percussionist Peter Davis Barr; drum beats serve to accent and reflect the many emotional turns and buildups during the course of the play. This use of percussion creates a greater feeling of suspense, further emphasizing the emotional twists and turns. At just under an hour long, I found myself wishing Bofill had written more to the powerful story of Michael and Ana.